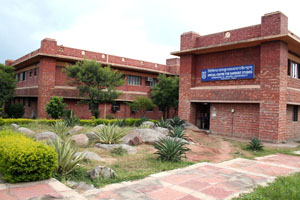 The School of Sanskrit and Indic Studies (संस्कृत एवं प्राच्यविद्या अध्ययन संस्थान) was created by upgrading the Special Center for Sanskrit Studies to a full-fledged school on 18/12/2017. The earlier special center was set up in 2001 with the following goals  -

►Undertake maintenance and preservation of heritage texts and manuscripts

►Constitute and expound theoretical framework from the primary intellectual texts of the Sanskrit tradition, and

►Extend and validate the classical theories by applying them both to contemporary Indian reality (modern Indian languages, literature, etc.) and to contemporary European Languages and literature (to reverse the existing data-theory relationship between the Indian academy and the Western academy and to recover theory status for the Indian thought),

►Undertake comparative research in Indian and Western traditions of thought in linguistics, literary and cultural theory, philosophy including philosophy of language,metrics and prosody, sociological thought, polity, gender, and ethnic studies and culture.